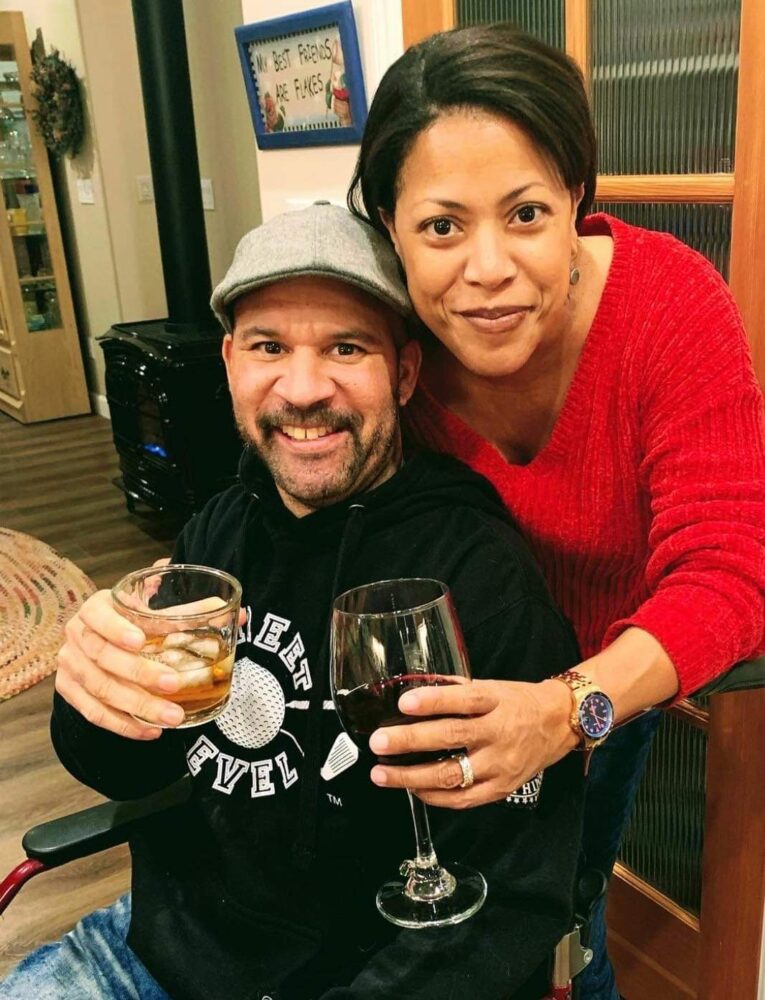 Thanksgiving week, 2018, I went on a hike with my wife and my brother, Jeff. After a mile of walking, he began to have a dizzy spell. Jeff explained that the dizzy spells had been reoccurring, along with loss of balance. Jeff is a lifelong athlete who played semi-pro soccer, spent much time at the gym, coached at a college level, and oversaw a youth soccer organization. He is the embodiment of an athlete. Witnessing him struggle to walk was concerning.

One night, in February of 2019, Jeff’s speech was negatively impacted and he had difficulty walking. He drove himself to the hospital and it was assumed he had a minor stroke. This was followed by months of medical visits and a decrease in motor skills. By the summer of 2019, Jeff was diagnosed with multiple sclerosis (MS). Shortly after, the prognosis changed to progressive MS.

By 2020, my mom, Janie, became Jeff’s caretaker while he continued testing and taking various medications to help manage his new normal. He also began using a wheelchair by the fall of 2020.

In January of 2021, Jeff’s physical state continued to decline and his speech was dramatically worse. The doctors also informed Jeff that they believed he had a rare neurological disease called, ALSP. I knew about ALS, but this disease was different from ALS.

I immediately began researching ALSP and was devastated to learn about its shattering effect and that there is no cure or treatments. As a family member of a loved one diagnosed with a terminal illness, I found myself panicked and grieving in silence as I desperately sought more information than the doctors provided. That’s when I found a page on Facebook called, Sister’s Hope Foundation. I read about the Founder, Heidi Brenneman-Edwards, and her sisters and other family members who lost their battles with ALSP. This incredibly unfortunate family story quickly became a benefit for me. I finally found a resource that could put me on a path of understanding and clarity about ALSP.

In March of 2021, Jeff was informed that a bone marrow transplant would be his only option as a hopeful alternative–a process that would not be easy. I, along with my middle brother, Joe, would be the best donor option for our brother. However, Joe and I had to be genetically tested to determine if we carried the same CSF1R gene mutation Jeff has. We both tested positive for the variant.

While Joe and I do not have symptoms, we knew this would be life-changing for us. I quickly joined the clinical trial at UCSF Medical Center and had MRIs completed which have been fine. The cruel part about this disease is the uncertainty which often breeds confusion. What are the chances that my mutation will develop into something else? At what age? What are the signs? As I continued my research, I learned that every person is different.

On March 11th, 2022, Jeff will begin chemotherapy followed by a bone marrow transplant. His donor is his cousin, Kai. With a terminal illness like ALSP, hope and our faith are what we must hold on to. While Jeff’s motor skills have declined, his cognitive capacity is strong–that gives us hope.

In the summer of 2021, I asked Jeff how he was feeling. He replied, “I have okay days and I have great days. But I never have poor days.” This is a man at the prime of his life, in a wheelchair, impacted speech, unable to fully take care of himself, and he “never has poor days.” This is a testament to the strength and courage my brother has. If everyone had the same outlook on life, what a world this would be!