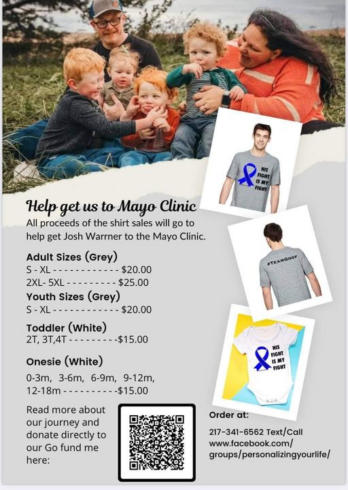 Josh’s Story and T-shirt Fundraiser:
If you are interested in a shirt, the orders need to be placed and paid for by 2/15.
You really don’t know how much you already have until all of a sudden you don’t. In other words, we take things for granted all the time.
Some of you know but others don’t. In July of 2020, Josh started to have some issues with his walking and speech. In August after his grandpa passed, I started to notice more cognitive issues where Josh was distant and isolated at times and very irritable at the littlest things. He saw his PCP and they said he had depression and anxiety due to his grandpa’s death and put him on medicine and had us schedule a consultation with psychiatry for screening for dyslexia. In October Josh’s shaking in his right hand became much worse than normal and he started having memory issues and incontinence, so we took him to the ER. The doctors did a CT as well as labs and said they were all normal his shaking was due to his anxiety and sent us on our way to follow up with his PCP again. In November he had his follow up and the did more labs and diagnosed him with an essential tremor in his right hand/arm and put him on meds to help with it. Fast forward to a few days before Christmas, Josh had more irritability, confusion, memory issues, problems with his walking and slurred speech. On Christmas his symptoms were noticeably worse, so I took him back to the ER in hopes of getting some answers. Josh had MRIs, Labs, a CT, EEG and a Lumbar Puncture. We saw a group of neurologists and ultimately, we were given the news that Josh had Leukodystrophy.
Leukodystrophy is a rare genetic brain disease that affects the brain and central nervous system by causing damage to the myelin part in our brains. The disorder is progressive. There are over 50 different types of Leukodystrophy. Josh had genetic testing done and spoke with a Genetic counselor (we have not spoken to his neurologist about his results yet) about his results and we now know he has Adult-Onset leukoencephalopathy with axonal Spheroids and pigmented glia (ALSP) or (HDLS). It is very rare and hereditary. Only about 10,000 people in the US have this specific type of Leukodystrophy. There is a 50 percent chance it was passed down to our kids, but we have not had them tested yet. This disease is developed from the CSF1R gene mutation. Symptoms have been known to start in people as early as 30 and range up to 47. There is no cure for this disease, but Mayo Clinic in Florida has a clinical trial that could help slow the progression of the disease. The clinical trial consists of a Bone Marrow Transplant, all though it won’t reverse the damage already done there are studies that show that the BMT can help stop the progression of ALSP and even prolong patients’ lives in some cases. Our goal is to get Josh into this clinical trial in hopes to prolong his life and to hope for as much quality time with him as we can get. Typical survival rate is 2-8 years after onset of symptoms with the average being 5.5 years. Bone marrow transplants for patients with ALSP are considered experimental and insurances don’t cover them, so we are hoping to get him into the clinical trial and approved to participate in it with Mayo Clinic. The initial cost to see the specialist and do the test required to see if he can be in the trial is $5,000 alone. Along with that is the cost to travel to and from the Mayo Clinic in Florida and the cost to stay during his initial visit and testing as well as time off from work. Mayo Clinic in Florida has a specific neurologist who is specifically studying the disease Josh has and doing these trials. So, we are asking for everyone’s help. We never thought we would spend our days worrying, fighting, and praying for miracles. Sometimes life is so beautiful that we become complacent, invincible, and then in a blink it all changes. Josh’s spirits have remained positive and strong throughout all of this, and he continues to be strong. He refuses to complain in front of anyone and doesn’t like to focus on his recent limitations. He just wants to keep fighting and enjoy his time with his kids.
We have considered whether to put everything out there and do a go fund me and decided we want to give this our best shot. We want to spread awareness of rare diseases like ALSP, and we need help getting the expenses to get him to Mayo. If anyone decides to help, we will use the funds to help cover the initial cost to see the specialist and travel to Mayo Clinic as well as any other medical related expenses Josh may need in the time to come. We have applied for him to get on disability but that takes months to years to get approved.
Anything helps.
Thank you all for your thoughts and prayers and if you’ve made it through this extremely long post thank you for taking the time to read it. If you can’t donate, we ask that you please share.
We will continue to update everyone throughout this process of making our way to the Mayo Clinic and provide updates as he continues to battle into the unknown.
Thank you so much,
Love The Warrner’s
(With permission, copied from their GoFundMe page) 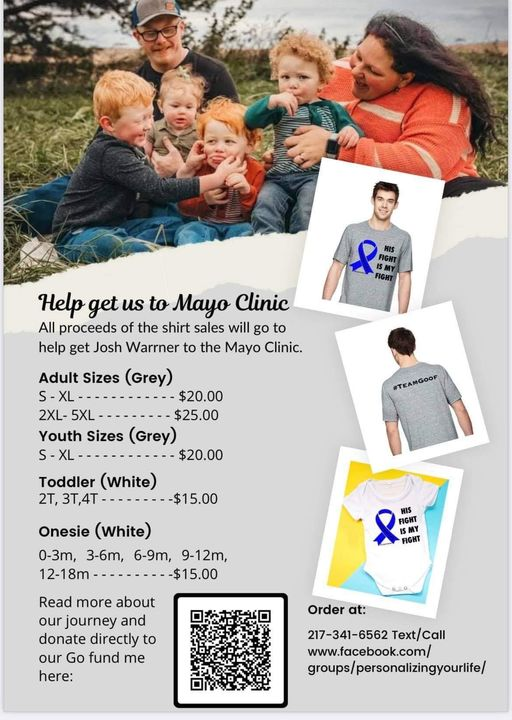