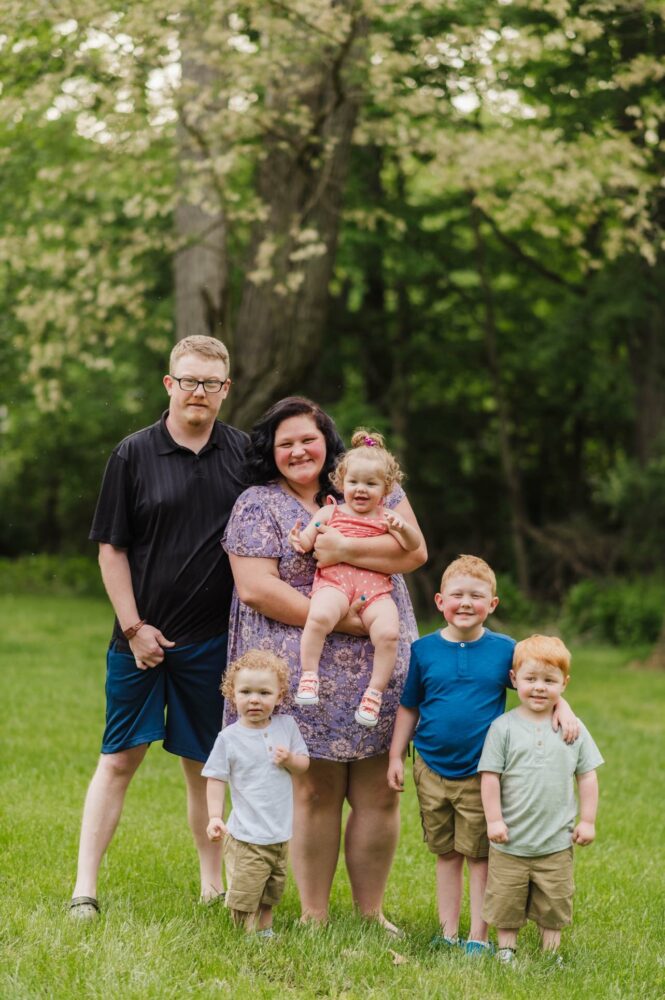 You never know how much you have until suddenly you don’t. In other words, we take things for granted all the time. Nothing prepares you for the news that your loved one has a fatal terminal illness with no treatment options or a cure. We were faced with those words when my husband, Josh was diagnosed earlier this year with the CSF1R gene mutation which causes ALSP.

In December 2021 after months of appointments, ER visits, and constant changes in behavior, I brought him back into the hospital desperately seeking answers and guidance. After tests, scans, and labs they told us they believed he had MS. We spent several days in the hospital seeing multiple groups of doctors and neurology. After they collaborated and determined a diagnosis, they met with us to give us the news.  They believed he had a leukodystrophy, a rare genetic brain disease, but only genetic testing could confirm it.

In the meantime, we reached out to everyone we could to gain as much support and education as we could. I joined Facebook groups, researched, and got in touch with Heidi from Sisters’ Hope Foundation to learn more about her family that had been affected by this rare disease.

In March, we met with Josh’s Neurology team, they confirmed the genetic testing results and advised us of our only option. Their expert opinion was palliative care. Keep Josh comfortable by managing his symptoms. Before going into this appointment, I had talked to different families diagnosed with ALSP and received the names of doctors studying Josh’s brain disease. We had been connected to Dr. Wszolek at the Mayo Clinic in Jacksonville, FL. Josh was scheduled to meet with Dr. Wszolek and a team of doctors at the Mayo Clinic to evaluate Josh’s progression and determine if a bone marrow transplant was an option. Josh underwent multiple tests, scans, and a lumbar puncture. We were told Josh, most likely, had 2-3 years left to live. His brain progression was so advanced, and we could pursue the bone marrow transplant option but with his current deficit’s, confirmed by his brain scans, the transplant wouldn’t benefit him. After a week in Florida, we left with the answers we so desperately sought but our hearts and spirits were crushed.

Josh is the father of 4 beautiful children. We have 3 boys and a girl ranging from 5 years old to 1.5 years old. When given the news of his diagnosis we were advised we could have our children tested as there was a 50 percent chance ALSP could be passed down to them. We spoke with their doctor and a genetic counselor to help us make this decision. We chose to have our kids tested. One month after Josh’s visit to the Mayo Clinic, we began the process of having the kids tested so we could hopefully catch their diagnosis’ early and watch for clinical trials and treatment options. The amount of worry, stress, and heartache I went through waiting for each of my kids results to come back was more than I thought I could handle. I can’t begin to tell anyone the number of times I cried, prayed, and tried to process all the news I had received at this point. We had just received such a difficult diagnosis with Josh, but nothing prepared me for what was coming next. April 4th, 2022, we received the news our precious 2-year-old son, Reed was also positive for the CSF1R mutation which causes ALSP. I was in complete shock, not only did my husband have this cruel disease but now my sweet, innocent baby had it as well. After Reeds diagnosis we were very proactive. He was previously diagnosed, or now we say mis-diagnosed, with what they thought was autism.

We spoke with his pediatrician shortly after we received the news to try to get a game plan started. We decided to start with a sedated MRI to see if any changes were occurring or if any had occurred. While awaiting approval from insurance I reconnected with Sisters’ Hope Foundation. I reached out once again to Heidi in hopes to be connected to some doctors who specialized in pediatric cases of Leukodystrophy. Sisters’ Hope Foundation offered wonderful support and resources. They arranged for me to have a phone call and intake with the Children’s Hospital of Philadelphia (CHOP) so Reed could be scheduled for an in-person appointment with their best specialists.

In the meantime, Reed did undergo his sedated MRI. We received terrible news. Areas of his brain showed white matter changes and degeneration as well as signs that he had suffered a stroke at some point in his life. All this was consistent with a diagnosis of ASLP. Reed will continue therapy and additional testing. We are hopeful CHOP will agree with Reeds current neurologist and we can start the process of a bone marrow transplant in hopes to have many more years with him. As many of you know, ALSP is a hereditary brain disease. The mutated gene was passed down to Reed from his father, Josh.

Until a couple weeks ago we didn’t know who passed the mutated gene to Josh. His mom? Or his dad? Josh’s dad passed when he was young, and his mom is currently living in a nursing home as she was diagnosed with early onset dementia, 3 years ago. When Josh was diagnosed, we submitted for a kit to be sent to have his mom tested. We chose to have her tested due to her similarity in symptoms with Josh. Once again, my family was hit with extremely difficult news. On June 8th, 2022, we learned Josh’s mom, Linda, was the 3rd confirmed family member diagnosed with ALSP. I can’t tell you how much pain, uncertainty, and all over sadness my family was feeling at this point. I will say there is nothing more heartbreaking than looking at someone you thought you knew and being unable to recognize who they now are. It’s tragic, seeing and holding a body that used to carry a soul that collided so beautifully with your own, but then realizing you have no idea who or what it even is that now occupies its insides. They are not the same person; they are not who we once knew. They are not who brought us so much joy to our days and comfort at night. Maybe I’m trying to hold on to what is clearly already gone because it doesn’t make sense in my head. Loving and caring for someone with ALSP is one of the hardest things. There are days I feel like I’m grieving. I feel like everyone battling alongside their loved ones with this cruel disease is grieving.

Grieving isn’t just something we experience when a person physically dies. You can grieve the loss of someone who is still alive, and it hurts just as much. I grieve the memories we won’t get to make with Josh every day. Him not being able to see his children grow up, graduate, get married. I grieve my mother-in-law not being able to become a great grandma and see her grandkids succeed or watch her son continue to be an amazing dad. I grieve not getting to share more wonderful years with my husband and also grieving the what ifs and uncertainty with my beautiful son. I grieve in silence as I watch them all struggle through their own set of symptoms and progression. Rapidly declining every day.

I never knew how strong I was until we started going through the process of their diagnosis’. Each of them more painful than the next. It has been a roller-coaster of emotions taking in all the news. Right now, we as a family are just rolling with the punches, as I’m trying to figure out how to be the best wife, mother, and daughter in law to them and to help them live the most normal life possible. The last few months have been stressful and full of so many emotions, but we will continue to cherish each day and continue to make lasting wonderful memories together.

My life has changed in what feels like a blink of an eye.