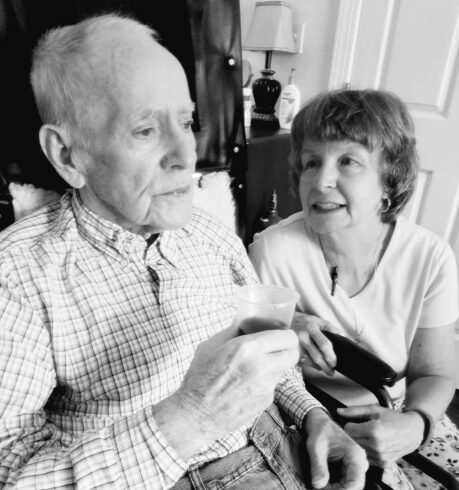 Daniel and I married in 2006.  At the time he told me that he had family members who had been diagnosed with Pick’s disease which is a type of frontotemporal dementia. He told me about his sister (age 48) and brother (age 62) who had died of this and some stories of his grandfather who died at age 60 in a state hospital. In the summer of 2009, we attended a family screening for the disease that many family members seemed to share. The screening was done by physicians from UVA (who had seen a connection of many patients and suggested there was a genetic disease they shared) and Dr. Wzsolek (from Mayo Clinic Florida who had other kindred groups with similar symptoms).  Dr. Wzsolek wanted to continue research to find the gene responsible and to include Daniel’s family.  Daniel was 72 at the time. I told him he was “lucky” because this was a disease of younger people, and he was too old.  I soon learned of family that had not been diagnosed until later in life.  We also heard how far this disease had spread through their family.  Daniel’s grandfather had 9 siblings, one of which had 20 children, his father was one of 7 and Daniel had 5 siblings.  Their immediate family was so large that they completely lost touch with any distant cousins, many who had moved to other states.

Over the next year, Daniel began to show signs that concerned me.  He could not repair household items with the ease he had done in the past, he became very anxious while driving and didn’t know where he was, and a burned-out taillight sent him into a tailspin.  I contacted his doctor and explained what I was seeing, saying I didn’t know if this was normal (the family would say “my dad has always been like that”).  I was told to bring him in, and a simple test indicated that things were not “normal”.  In the fall of 2010, Daniel had an MRI and extensive neuropsychological testing which showed brain atrophy and suggested a significant compromise in cognitive function.  Daniel’s reaction was that he was as smart as any of those doctors.  But he spoke a lot about his grandfather after his diagnosis.  I began planning because at the time I knew there was no treatment or cure.

In December of 2011, the Mayo Clinic announced the discovery of the gene responsible for a brain condition they called hereditary diffuse leukoencephalopathy with spheroids – HDLS.  After the screening, we were given information on brain donation.  I talked to Daniel about the importance of brain donation to research.  He agreed and signed the papers.  At a family gathering, Dr. Wszolek explained the discovery of the gene. He mentioned that now many researchers were interested in working to find a treatment.  I asked Dr. Wszolek if he would test Daniel for the gene to confirm the dementia diagnosis we had.  He agreed and Daniel tested positive for the CSF1R gene.

I retired as planned in January 2011 and began a 6-year journey of caregiving.  For the first few years, we continued to live as normal as possible spending time with family and friends, going to concerts by Daniel’s favorite classic country artists, and enjoying our time together. I knew that the time would come when I would be a full-time caregiver.  Many times, Daniel would attempt a household chore, and I would find him struggling, and realize he had forgotten how.  We were only 3 years into this journey when I realized he didn’t remember how we celebrated Christmas.  Daniel spent the last 2 years in a memory care assisted living facility close to home.  I was no longer able to physically care for him at home.  He also qualified for hospice at the same time and remained in hospice until his death. Hospice was a huge help with physical and emotional care for both of us.

Daniel lived 6 years after his diagnosis and died in November 2016.  His brain was sent to Mayo Clinic and the diagnosis was confirmed.

For those who have tested positive, please be encouraged by those who, like my husband, wasn’t diagnosed until their 70s.  Many like my husband live long full lives before their diagnosis or even die from another cause.

It’s now 5 years later and I’m very hopeful to find research has been done and treatment in the form of Bone Marrow Transplant (BMT) has been offered.  There is reported improvement in some after BMT. I applaud Heidi and her team for forming the Sisters Hope Foundation, and their commitment to family support, awareness, and continued research so one day we will see the first survivor of this disease.  There is HOPE!

Carol – wife and caregiver for husband with HDLS / ALSP, her husband passed in 2016